I really had no idea what I was getting into when some Barn Swallows moved on to our porch. At the time, I didn’t know we would be hosting hellbirds, but it has become evident in the last few days that yes, hellbirds have made our porch their home.

When they first set up camp on our porch, I named them Lucy and Desi. I was so innocent back then. I yearn for those days.

Here is a picture of the birds, taken yesterday. 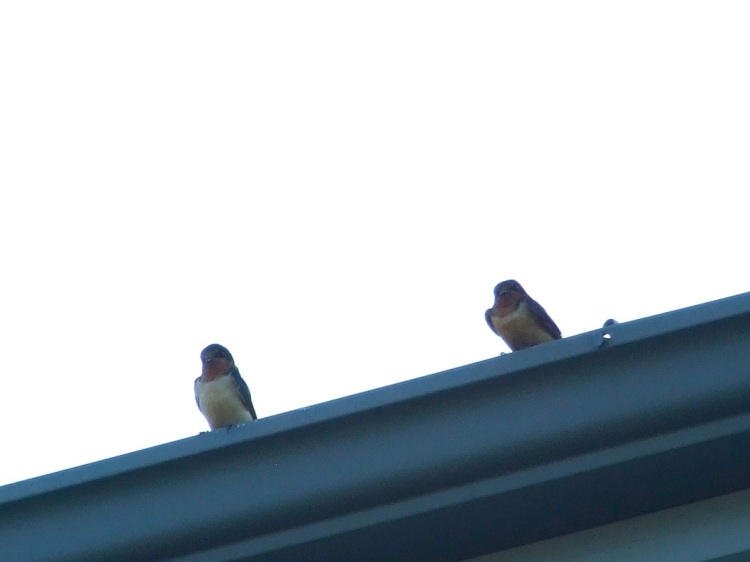 Said birds were fine for the first little while. When we neared our front porch, which happens every now and then, they would just fly away. They laid six eggs, five of which hatched. Here is a picture of the nest and the cute, helpless little baby birds. Blind and actually quite ugly. (Click on the picture for a nice close-up of the featherless wonders.)

First of all, I have to question the parenting skills of any bird that tries to fit seven birds into one nest (5 hatched + the adults). Because as you can tell, the nest is actually pretty small. We wondered from the start how everyone would fit.

Turns out they don’t all have to fit.

Things were pretty good until late last week, when the babies were starting to get bigger. It was getting crowded in that nest. Next thing we know, one of the babies is on the ground, and the parents begin to get more worked up whenever we’re in the front yard.

I put the baby back in the nest, but the next morning there were only four birds, and tufts of feathers spread across the front porch. I could only assume that one of the birds had fallen out and gotten et by one of the neighborhood cats. By the way, I’d taken to keeping a store of small rocks near the front porch, so I could chase cats off when they came near.

The birds, apparently, did not appreciate my efforts to defend them. Late last week, after the one baby “disappeared” mysteriously, the parents really stepped up their aerial defenses. If you came inside the front yard, they would start chirping and getting all worked up, and dive near you to scare you off.

Now, I’m a fan of birds. I like to take pictures of them. I like to try and identify them when I’m driving. Nothing is more fun than watching a few smaller birds chase off a larger predator bird.

It’s not so much fun when I’m the predator getting dive-bombed.  And in the last two days it has gotten quite intense. The birds hang out on the rain gutter above the front door (as in the first picture posted above), watching for hapless victims. They seem to have forgotten that they’re the guests here. Hellbirds. Indeed.

Here’s a little video I took yesterday afternoon. I want you to know that I risked my life for this video. I also cut out the part where I run screaming into the garage.

Anyway, on Monday things got serious in the hellbird nest. One of my girls was watching outside the glass door to the porch, and she screams, “They’re pushing one of them out!”

So we all rush there and what do we see? One of the baby birds clinging on for dear life as one of the others tries to push it out. Seems that baby swallows don’t like crowds, so much. In fact, before long, two of the babies were pushed out. Only two cute little hellbirds remained in the nest.

In fact, I don’t think that he parents are even nesting there, anymore. At night they’re nowhere to be seen. I suspect that these babies are big enough that they have forced the parents to sleep spmowhere else.

And they’re not so cute, anymore. They look more like thugs. Take a gander at how they looked last night.

Yeah, pretty much like they’re waiting for an opportunity to break the kneecaps of anyone that comes near their little pooped-on nest.

It was actually pretty difficult to get that picture. Their eyes have opened, and now they’re smart enough to duck down into the nest when we even stand in the door on the other side of the glass. When we do that, the parents will fly around the porch, even doing a hovering thing a little bit. If you want to exit our front door, you’ve got to make a run for it. No standing there in the doorway before you exit. You’ve got to make a run for it, and hope you don’t get thwacked in the mad dash.

There is an upside to having hellbirds on your porch, though. They’re great for getting rid of salesmen.